Meherish Rahman, a Bangladeshi American, was 16 when she immigrated to the United States. She got married at the age of 27. In the first month of her marriage, Ms. Rahman’s refusal to sing at a community picnic sparked tension with her husband. At home, in the middle of the argument her father-in-law walked in. “I said, ‘Dad, we are talking here,’” Ms. Rahman recalls, “My ex-husband started punching me.”

On Saturday, Bangladeshi Americans gathered to discuss domestic violence. The main objective of the seminar, part of the Federation of Bangladeshi Associations of North America (FOBANA) Convention in Jamaica, Queens, was to find ways to put the men’s fist down. Men were well represented in the audience.

Bangladeshi American activists, lawyers and journalists discussed whether domestic violence could be tied to certain ethnic groups. The discussion continued with speeches about how violence manifests itself within the Bangladeshi community and the measures necessary to end it.

In 2013, 65% of the call volume that the New York State Sexual and Domestic Violence Hotline received was from New York City and Long Island. The staff answered calls in 18 foreign languages. Bengali was the 7th most frequently used language, despite the relatively small size of the community. According to the latest census data, there are 53,174 Bangladeshis living in New York City that is home to eight million people. 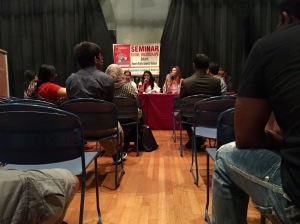 Rokeya Akhter, President of the New American Women’s Forum of New York, realizes the magnitude of the threat posed by domestic violence. “Whatever I see, there is no help for them,” she said, referring to the victims, “It’s a big problem.”

Chaumtoli Huq, a human rights attorney, added that a relationship between ethnic identity and the severity of domestic violence simply does not exist. “It’s not about culture; it’s about power,” she said.

The abuse of power can manifest itself in various ways. The New American Women’s Forum has found that, among Bangladeshi Americans, psychological torture is more prevalent than the physical kind.

Rokeya Akhter emphasized that women brought to the United States by their husbands are especially susceptible to psychological pressures. Some women are not allowed to work, due to their husband’s perception that the outside world opens their eyes, she said. Some are ripped apart from friends. Yet, others are prisoners at their own homes. Ms. Akhter mentioned that men commonly use the threat of deportation to discourage victimized women from asking for help.

Meherish Rahman lived with nightmares of deportation for many years. These fears were in part responsible for her stretching her marriage for a decade. She escaped from her husband, after Sanctuary for Families, an advocacy group for survivors of domestic violence, helped her receive a green card that allowed her to work and support herself, Rahman said.

The panelists seemed to agree that economic empowerment is key to win the battle. Dr. Ivan Khan works for Sapna NYC, an NGO that promotes “the health, social and economic empowerment of New York City’s South Asian community,” as its website states. He believes that the women they have helped open a store are much more likely than women without economic freedom, to escape domestic violence. 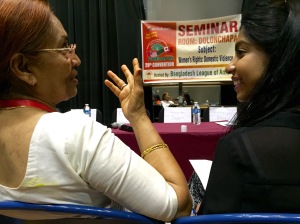 Chaumtoli Huq, a human rights attorney, believes that legal awareness should be combined with economic empowerment in order to prevent domestic violence. For instance, victims who are forced to quit their jobs can apply for unemployment insurance benefits, in New York State. “It’s a shame if we don’t use those laws and also push for more,” Ms. Huq said.

As the seminar came to a close, Morshed Alam, Founder of the New American Women’s Forum of New York, asked permission to speak. His words carried hope not only for Bangladeshi women like Meherish Rahman, but for all. “Empowered women are at this seminar. Men are here to stand by you,” he said. However, not every member of the community was as supportive of the cause as Mr. Alam. Although there were around 30 participants at the seminar, the numbers attending the colorful cultural events of the Bangladeshi convention reached hundreds.