Reza Zarrab is one of the biggest Iranian sanction evaders of all time. His case in the US has been ruining Turkish-American relations and I’ve been following it inside the federal courthouse for months. The jury trial continues today. Here’s what the fuss is all about: http://t24.com.tr/haber/usa-against-reza-zarrab,499258

I’ve also compiled an interactive timeline that puts pretty much everything into perspective: https://www.tiki-toki.com/…/953…/The-Reza-Zarrab-Chronology/
Feel free to play around with the 3D and zoom settings as well the Category Bands that will allow you to compare what has been happening in Turkey, Iran and the US simultaneously…

Just in case, here’s a basic, text-only chronology for you:

December 3, 2011: A draft letter is prepared for Reza Zarrab’s signature. It is addressed to the general manager of the Central Bank of Iran:

“…the Zarrab family… considers it to be our national and moral duty to declare our willingness to participate in any kind of cooperation in order to implement monetary and foreign exchange anti-sanction policies.”

September 23, 2014: According to Hurriyet, a United States judge approves a search warrant for Zarrab’s Hotmail account.

July 2015: The Iranian government signs the nuclear deal with six world powers — including the United States ­­– in exchange for the gradual lifting of the economic sanctions.[8]

December 15, 2015: A sealed indictment regarding Zarrab is presented to a US court.

March 6, 2016: Babak Zanjani, Zarrab’s counterpart, sentenced to death in Iran for withholding billions in Iranian oil revenues that were being transferred to Iran via his companies.[9]

March 19, 2016: Zarrab boards a Turkish Airlines plane in Istanbul with his family. According to Zarrab’s WhatsApp messages, the Zarrab family seems to have been on their way to Disney World in Orlando, Florida.

March 29, 2016: President Erdogan comments on Zarrab’s arrest: “This is not a matter that has to do with our country. Mr. Zarrab’s lawyers will give the necessary answer.”[12] 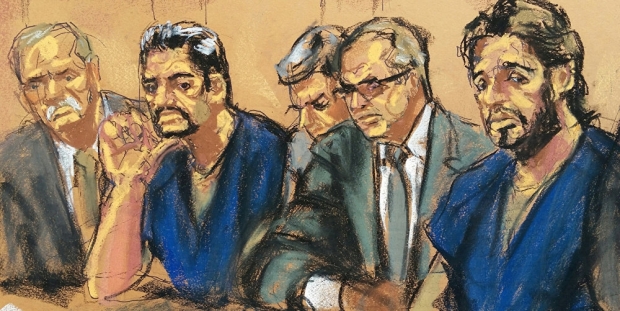 July 22, 2016: The Turkish police raids a law firm whose owners were charged with being members of a terrorist organization led by Fethullah Gulen.[16] The law firm was formerly called Yuksel Karkin Kucuk.

August 30, 2016: Defense makes a motion to recuse the court due to Judge Richard Berman’s alleged Gulen connection. In 2014, Berman was hosted in Turkey by Yuksel Karkin Kucuk.

September 21, 2016: During his meeting with Vice President Joe Biden, Erdogan demands the release of Zarrab and the firing of Preet Bharara, according to unnamed US officials cited in David Ignatius’s opinion piece.

September 24, 2016: “The US Department of Justice handed Zarrab over to names which FETO (pro-Fethullah Terrorist Organization) had wined and dined,” says President Erdogan. “After all, we have to seek justice for he (Zarrab) is our citizen.”[17] The President acknowledges that he mentioned the case to Vice President Joe Biden. He comments that “malicious intentions” were involved in the case, as his name had been entered into the court record.

September 29, 2016: Judge Berman decides not to recuse himself saying it has been four months since Zarrab’s arraignment.

October 17, 2016: Motion to dismiss denied. Defense argued that this case lies outside the United States’ jurisdiction.

October 30, 2017: Zarrab’s lawyer misses a filing deadline for documents that would allow him to challenge certain pieces of evidence. Atilla’s lawyer states that his client may be the only defendant who appears at trial.[24]

November 8, 2017: The US Federal Bureau of Prisons website shows that Zarrab has been released on this day.[25]

November 16, 2017: BDDK, the Turkish banking watchdog, introduces new regulation allowing banks to transfer their assets to another entity without dissolving.[26] The President of BDDK, later says that the law has nothing to do with Halk Bank.

November 27, 2017: Jury selection begins. According to Reuters, Judge Berman tells potential jurors that Mehmet Hakan Atilla will be the only person on trial. The case’s name becomes “US v. Mehmet Hakan Atilla.” The fate of the seven additional victims is unclear.

November 29, 2017: Zarrab’s testimony begins. He tells the jury that he paid over $50 million to Zafer Caglayan, the Turkish economy minister at the time, so that Caglayan would force Halk Bank to take part in Zarrab’s scheme. Zarrab also says that he was hoping that his lawyers, such as Rudy Giuliani, would broker a prisoner exchange deal with Turkey.

November 30, 2017: Zarrab’s testimony continues. He tells the jury that he had been told that Recep Tayyip Erdogan, the Prime Minister at the time, had approved the use of two Turkish-state-owned banks in the scheme. Surprisingly, he adds that Atilla, the most knowledgeable Halk Bank official with regards to sanction regulations, was forced to take part in the plot by his boss and that the defendant never asked for a bribe.

December 1, 2017: Prime Minister Binali Yildirim questions Zarrab’s credibility as a witness and adds: “I hope that he turns back from making this mistake.” The Prime Minister emphasizes that the goal of this trial is to “pressurize the Turkish economy.”